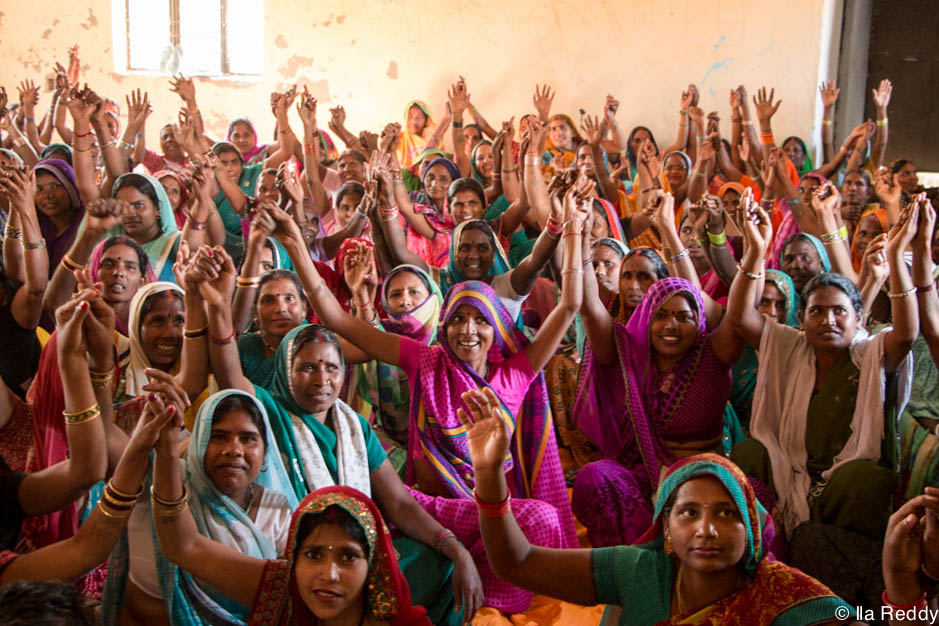 Originally published on the official blog of my alma-mater Institute of Development Studies.

The state of Uttar Pradesh (UP) represents 9% of the world’s poor and like in most parts of India (and the world), women are under-represented as voters, political leaders and elected representatives. Few women contest on unreserved seats in the local government elections, while those who get elected, often end up as mere proxies at the hands of their husbands, other male members of the family, or upper caste men of the village.

The most common reasons behind their lack of participation are poverty, social status- primarily caste, lack of education, lack of information and awareness, and common myths that exist with regard to reservations (most villagers still believe ‘General’ or unreserved seats are reserved for men, and that women can only contest on seats reserved for women), perceived expenditure, and eligibility criteria (such as required education level, income, etc.).

However, the biggest barrier to women’s participation is their under-confidence to participate in the political sphere, partly due to the factors mentioned above, but also due to existing gender stereotypes, and how women have been historically socialised to view themselves as inept and incapable of political leadership. Women, especially in rural India, are often too scared to make mistakes, to take risk, given that society is far less forgiving towards women than to men. They are further discouraged by the perceptions and (often legitimate) fears of their family. Further, the challenge lies not just in contesting or winning elections, but also effectively exercising power once elected, and not ending up as mere proxies.

Over the last year, I have been leading a women’s leadership program in 42 districts of UP, intended to increase women’s participation in local governance (Panchayati Raj institutions). The programme works directly with over 10,000 community leaders belonging to women’s Self Help Groups, and coming from marginalised backgrounds. The programme was aimed at increasing women’s participation in the electoral process as informed voters, campaigners and candidates, by equipping them with information about their rights, local government and election process, through monthly training sessions. The sessions also included collective identification of problems of the village, as well as collective activism to access entitlements and hold public officials accountable.

In the recent Block and District level elections, over 1000 women who had been attending our workshops contested, and over 400 of them won! Further, thousands more are currently contesting the ongoing Panchayat (village council) elections. Anyone familiar with the socio-political context of Uttar Pradesh would know that this was no easy feat! So what made these women decide to contest elections?

The biggest motivation for their increased participation was serious disillusionment and discontent with the existing status quo and leadership. Women’s voices are mostly left out of decision-making processes as they are rarely invited to participate in Gram Sabhas (village council meetings) that are meant for collective decision-making by all members of the village. Further, even if they are present at these meetings, they are rarely heard, and their needs rarely prioritised. One of the biggest problems women face in rural Uttar Pradesh is lack of toilets, risking their health and security while practising open defecation. However, since women’s voices are excluded from public meetings, as well as decision-making, it is unlikely that their needs, whether it’s toilets, health services, water or food, are prioritised over other needs and demands.

Secondly, by participating in the training sessions we organized over the year, the women gained access to a lot of information that succeeded in busting myths that had hindered their active participation all these years. It also greatly increased their confidence in their ability to effectively participate in decision making processes.

Further, being part of a Self Help Group meant that they were already organised, had (over the years) improved their economic condition, now had (comparatively) greater say in decision-making within their household, and had experience in collective decision-making, participatory meetings, as well as greater awareness about their rights and entitlements, compared to an average woman of the village not part of a group.

Working for a large-scale program, and interacting with hundreds of women from extremely poor and socially excluded backgrounds, allowed me to experience, firsthand, how Indian Democracy manifests itself at the local level in rural India. While the women’s Self-Help Groups are highly democratic, participatory and inclusive spaces; witnessing and contrasting it with their day-to-day struggles of engaging with public officials in order to access their basic rights and entitlements (food, water, employment, housing, toilets, social security, etc.) was an eye-opener and needless to say, an invaluable learning experience.

I believe a dedicated programme for women aimed at greater political awareness and participation is definitely effective in increasing participation levels when women are already organised and part of systematic programmes addressing economic and social empowerment. Equipped with accurate information about political processes, and being a part of a collective of women (ensuring they aren’t alone, and thus, safer), gives them tremendous confidence to participate more effectively, and negotiate within their homes, as well as in society.

Further, ‘participation’ doesn’t just mean engaging as voters and candidates, but also as more informed citizens and activists. Upon collectively identifying the problems of their village during the trainings, the participants also collectively prioritized the direst needs, and planned collective action for the same. This activity saw hundreds of women come together in their respective villages and collectively hold different levels of public officials accountable, thus accessing government services and schemes that they had been denied all this while. In several places, just the act of a hundred women showing up at the elected representative’s house, or at the district office, was enough to show their collective strength and spirit, and ensure they got their rightful entitlements.

As the local government elections conclude this month, the real challenge begins now. Most of the women who got elected were nominated as candidates by their entire group; they didn’t just individually decide to contest. It will, thus, be interesting to see what sort of leadership they exercise. Will they succeed in retaining their power, and initiating a new kind of leadership that is participatory and inclusive? Will they continue to be as involved with their Self Help Group? Will having a woman as an elected representative increase the participation of women in public meetings? Will she focus more on services relating to human development outcomes, such as health, education, and sanitation, compared to her male contemporaries? Only time will tell.

Irrespective of the outcomes, the courage exhibited by these 1000 plus women in braving all odds and taking the leap, is a first step towards greater women’s political participation in India, which is not only crucial for the ‘deepening’ of democracy, but also for the promotion of women’s rights as human rights.