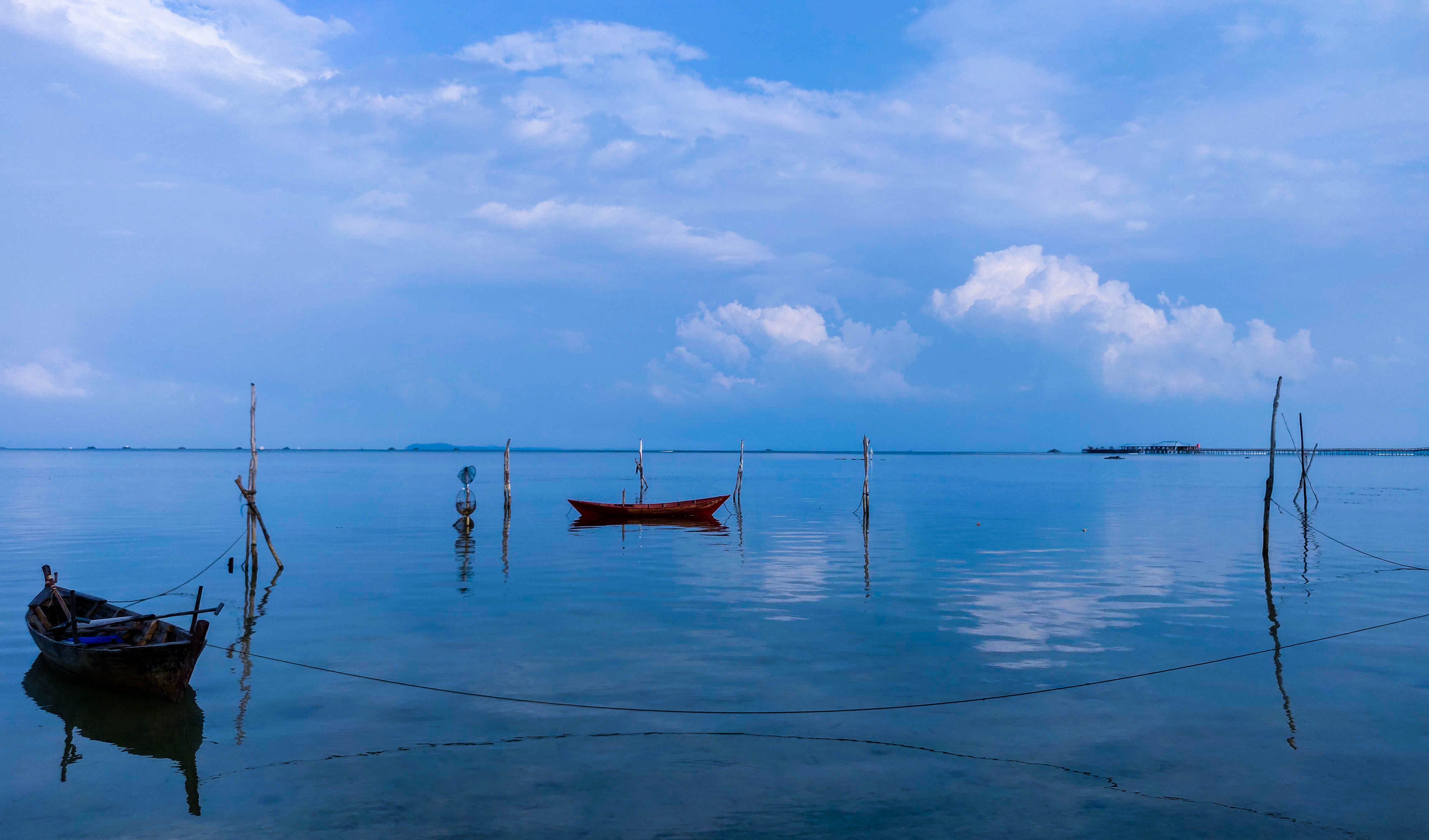 My first foray into Indonesia (admittedly a long-time dream destination for me) was not Bali or Jakarta… but a tiny island in the north of the country called Bintan.

A popular weekend getaway from Singapore (it’s only an hour away by ferry), it boasts of luxury resorts and golf courses, perfect for a laidback holiday amidst hectic work-weeks.

While budget travel can sometimes mean landing up in crowded places, in Bintan, it meant being away from most tourists. I found myself at a humble beachside property in the southern part of the island.

Exploring Bintan on a Budget

Bintan’s history can be traced back to the early 3rd century when it flourished as a trading post between China and India. Over the centuries, it came under the control of the Chinese, the British, and later the Dutch.

Nestled in a quaint village, my Airbnb was located in a part of Bintan that reminded me of the untouched parts of Goa. Barring the language difference, it was hard to tell whether I was in Indonesia or India (to the extent that some of the local shacks were even playing Bollywood music).

I had the beach to myself most of the time, and although it was hot, the sea breeze was nice and pleasant, making it the perfect place for some much-needed downtime.

I spent most of my first day walking along the sea, picking up colourful seashells and catching up on my reading.

This part of the island is particularly known to be a good spot for kitesurfing (July-August is the best season), paddle boarding and even scuba diving. It also has strong tidal variations, which in itself is interesting to observe.

Being in a non-commercial part of the island, however, meant that there are limited restaurant options in the vicinity- mostly local shacks (some without English menus) and an odd resort here and there. While the food is cheap, it depends entirely on where you’re eating, a single meal ranging from anything between SGD 2 and SGD 20.

With its rustic surroundings, it may not be every traveler’s cup of tea, but it’s a place where you can hear the sound of silence- quite literally.

An unforgettable experience in Bintan was a night-time visit to the mangroves.

A boat ride guided by the moonlight, I got to see hundreds of fireflies, smell sea lemons, spot a tiger crab and a baby crocodile (I got lucky that night), and witness monkeys sleeping on bare coconut trees!

The roots of the Mangrove trees are particularly fascinating- they are so intertwined that the local fishermen use them to trap crabs.

More than anything else, it’s wonderful to wade through the calm waters at night.

Also read: Magic of the Night-time in Kaziranga

Rendezvous with the Sea Gypsies

Another interesting aspect of exploring Bintan was learning more about the local sea gypsies!

This nomadic community resides in homes made of bamboo logs, balanced on a drum, and a fishing nut hanging below. They move locations every season and depending on the tide. Their main occupation is fishing, and even though the Government has offered them housing near land, they prefer living in the sea. The unfortunate fallout of this is that their children don’t go to school, and instead, end up learning how to fish from their parents from an early age.

Doing just a weekend trip meant that I had limited time to explore the island beyond my immediate surroundings. Having slept early the night before, I woke up by 5 AM on Sunday to catch the sunrise that was, needless to say, mesmerizing.

There was literally no other person in sight, and as I walked along the sea, I found all kinds of treasures, from beautiful seashells to fresh seaweed, and even palm-sized crabs running around!

Like any other coastal area, the weather can be unpredictable. It started pouring around noon, which was perfect for a quick nap to the sound of raindrops. Two hours later, the sun was up again, the sea had receded to the horizon, and I could see patches of land where there was once water. I would’ve never guessed that it had rained heavily just a while back had I not known!

My ad hoc trip came to an end too soon, but the calm and laid back vibe of the place ensured it didn’t feel rushed. While Bintan is not as picturesque as other parts of Indonesia are known to be, it’s got all the necessary elements for some quiet time out, away from the hurry burry of city-life.

There is no Visa required for tourists from India visiting for a holiday for less than 30 days. More information can be found here.

I took the Bintan Resort Ferries (costs SGD 23 one way) from the Tanah Merah Ferry Terminal in Singapore and the journey was very comfortable.

I stayed at Ten Rooms (costs approx. SGD 60-90) which is an hour’s drive away from the Bintan Ferry Terminal (taxi costs IDR 300k one way). Very basic, but neat. They offer complimentary paddle-boarding sessions and help with taxi, tour and massage bookings. They occasionally organize movie nights and also teach kite-surfing in season (July-August is the best season for this).

I did the Mangrove night visit with Rumah Bintan (cost IDR 300k).