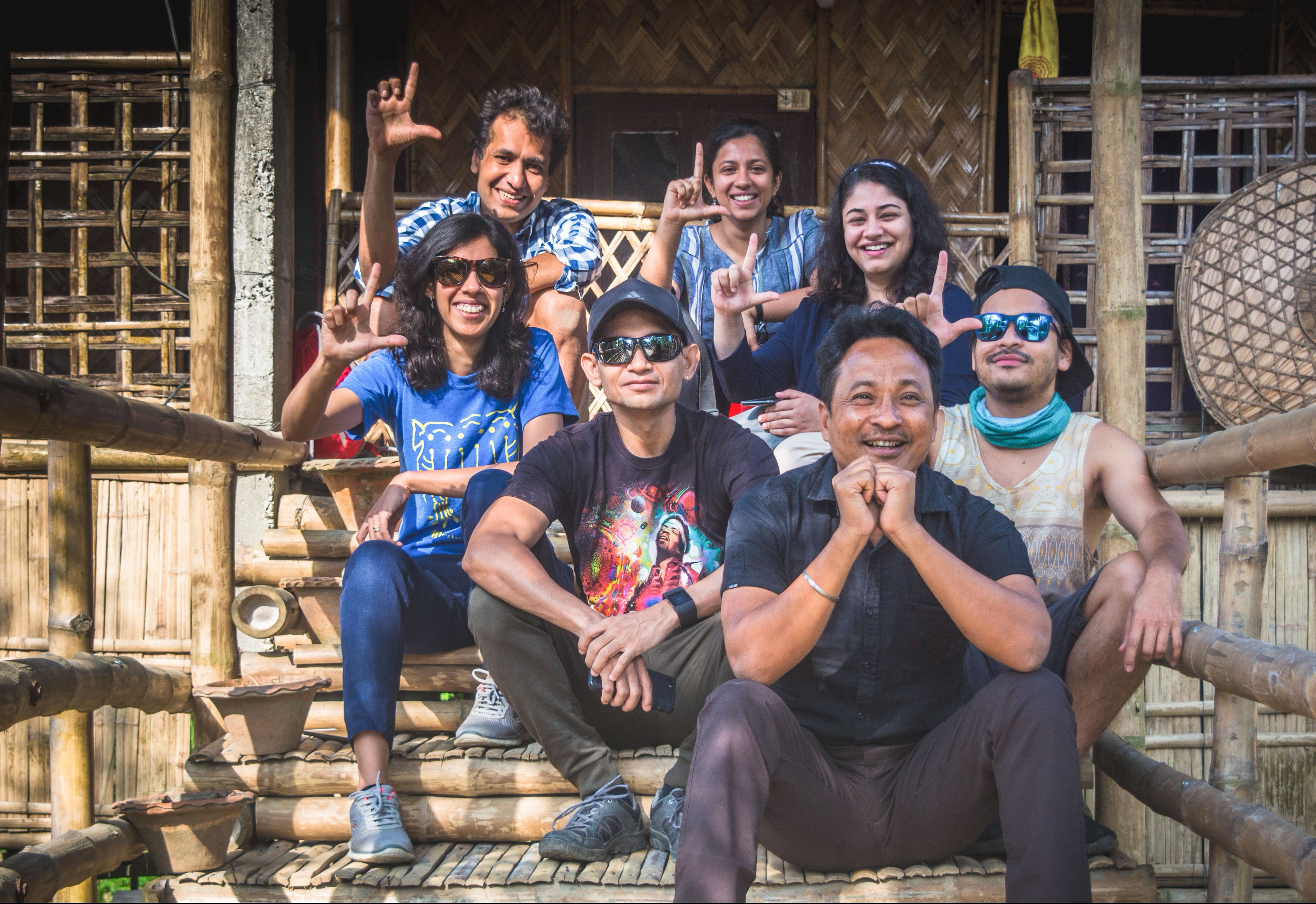 Located in the Brahmaputra river, Majuli is the largest river island in the world and has been battling erosion for years, shrinking from an area of 880 square kilometers at the beginning of the century to merely 352 square kilometres as of 2014 (source). Having read news reports about the changing landscape of the region over the years, I was excited about finally getting to visit the island and learn more about its people, culture and landscape.

After a quick and scrumptious thali at a nearby dhaba (really- dhaba food is SO good in Assam!), we got onto the ferry at Nimati Ghat (Jorhat). Packed with people (mostly locals), we decided to sit on the tin roof like some of the more experienced folks (it’s all about experiencing the local way of life, after all!) and enjoy the ride.

It was around 4pm in the afternoon, and as the ferry started to move, all I could see in front of me (from atop the roof) was the river, white river beds that looked like they were made of chalk (even as we passed by, we could see particles fall off into the river), and occasional boats carrying fishermen and their massive fishing nets. The cool breeze giving me respite from the sun, while I looked forward to reaching the island just in time to catch the sunset.

Less than an hour later, as we got off the ferry and continued the journey to our homestay by road, we caught the sunset in all its glory.

There is something about sunsets that has always left me enthralled. It reminds me of how small we are in the larger scheme of things.

Watching a display of colours, as they gradually transform the sky into a painting, feels like a performance; a different sight depending on where you are, but the same sun, and the same sky, for each of us- animals, birds, trees and humans alike. No discrimination based on caste, gender, creed or language. No war over who got a bigger part of the sky!

What more can one ask for after a welcome like that?

Settling in with Apong!

We were welcomed by Manjit da, our host at Majuli. His traditional B&B called Risong Family Lodge (more popularly known as La Maison de Ananda) had a handful of rooms, and the entire structure was made of bamboo (floor and roof included). Equipped with basic beds (again, made of bamboo), a mosquito net (essential!), and private (basic) bathrooms, we were all set to have quite a comfortable stay. We decided to take it light rest of the day, and looked forward to some ‘apong’ (traditional Assamese rice beer) and some grilled pork for dinner!

Sitting around Manjit da’s kitchen, chatting away with the group, learning how apong is brewed, and watching his lovely wife grill some pork for us made for the perfect evening.

The grilled pork, and the vegetarian thali that followed were excellent, and the apong was so easy to drink that before we knew it we had finished two jugs! (If you’re curious about how apong is made, check out this detailed article).

In the morning, we rented motorbikes (costs about INR 500 per day, while bicycles are at INR 100) and set out to explore the island, with its picturesque landscape and (mostly) good roads! It was amazing to see entire villages on stilts pass by.

Our first stop was a roadside village where we came across a spectacular, rather unassuming water body. There were little kids (and chickens) running around, so we decided to spend some time with them, clicking photographs, shooting videos, and generally chatting.

One cute little girl was showing off her lovely mehendi while giggling away, reminding me of the innocence and warmth that children exuberate. I wish we found as much joy in the little things in life as adults!

What I loved about these villages were that they were so raw, so real. They took me back to my days living in rural parts of the country. The simplicity of daily existence apparent in the houses, people and even animals!

When was the last time you spent ten minutes watching chickens scrambling for grains, and felt gratitude to be alive in such a beautiful world?

The most inspiring thing about the people we met in the villages was that despite the difficult life they lead, the joy for the small things in life isn’t lost! They’re kind, hospitable people, willing to smile at strangers and continue with their life despite all odds.

Art & Culture as a Way of Life

We were lucky to have a monk from the Auniati Satra (more about that later in the post) also act as our local guide and take us through the villages. We visited the Chamaguri Satra (mostly pronounced as Somaguri Satra), which is the mask-making community. Satras are basically Neo-Vaishnavite monasteries initiated around the 15th century and the hub of all cultural and religious activities across the island. 22 of the 65 Satras in Majuli are still operational.

Made of bamboo and clay, and then painted in bright colours, most masks represent Hindu mythological characters, and are mostly used in the raas leelas performed during festival time, and even otherwise. With Ravana and Narsimha glaring back at me, it was quite fascinating to watch the artisans craft these masks from scratch. The masks themselves can be heavy and uncomfortable to wear, but even children as young as 3 years are trained in the art form- wearing the entire attire and performing a dance-drama.

Next stop was a very backward village of 400 potter families called Halmora. Extremely poor (having lost land in the floods, year after year), this community makes earthen pots, carries them across the mighty Brahmaputra river to other parts of Assam, and sells each pot for as less as 10 rupees! (And here we are in the cities, cribbing about being underpaid and overworked).

We spent about an hour with one such family, where a young lady was making pots like a pro! Her young daughter, who was just back from school, looked on with amusement, as we watched her mother spin up a pot in minutes! Do note that there was no pottery wheel, and each pot was made by manually spinning the platform with her foot. In an era of machines and automation, human craftsmanship like this never fails to amaze me!

The last stop for the afternoon was one of the oldest Satras- the Auniati Satra, where we would also be having lunch at a monk’s residence. The Auniati Satra houses male celibate monks, and was established in 1653 AD! It is considered the epicenter of Vaishnavism and Satriya culture and the main idol of worship is Lord Krishna, or Govinda (you can read more about the Satra here).

We had the privilege of having lunch inside a monk’s residence. Our kind host had cooked some yellow dal, white rice, potato sabji and roasted brinjal for us, served on a banana leaf. While the meal was the simplest one we had on the trip, it was definitely one of the most satisfying!

After a scrumptious lunch and bloated bellies, we started back towards our homestay to get some rest, before setting out to catch the sunset in the evening. As we drove past the countryside, we spotted several migratory birds chilling in the fields and drinking water in the swamps. Coming from concrete jungles, it was quite an experience to share the space with rare birds that were so unassuming and indifferent to human presence.

Boating Our Way Through Sunset

In the evening, we decided to embark on a boat ride to catch the sunset. We got onto a local fisherman’s boat, and as he slowly rowed us into the water, it was one of the most serene experiences of the trip, with not a sound! The water wasn’t too deep either, and we could see the waterbed, tadpoles, and dragonflies flying in and out of the water. There were also a ton of snakefish looking for their next kill.

Before we knew it, it was our last night in Majuli. Time had passed by so quickly! By now our group had gotten to know each other pretty well, and there was a rapport that had developed (if you’re new to this blog series, read about the first leg of the journey here).

Further, we were now joined by Ankur, a young filmmaker from Assam itself, and we met Snehal, a traveler from Ahmedabad, who was there to spend some time exploring the region and volunteering at Manas National Park. The apong and a shared passion for offbeat travel and local way of life got everyone talking and joking, and there was stomach-clenching laughter late into the night, sparked by the most mundane things (like the lyrics of Vico Bajradanti).

Sometimes laughing with strangers brings a different kind of joy. It reiterates the power of human connection.

As we departed from Nimati Ghat to make our way towards Mon, Nagaland for the next (and final) leg of our journey, my biggest takeaway from Majuli and its people was to cherish the simple things of life while we’re still fortunate to have them- be it our homes, our environment, or our relationships. You never know how long they might last!

Have you been to Majuli island? What was your biggest takeaway?

Also read:
Magic of the Night-Time in Kaziranga
Of Silk, Sand & Skeletons: A Week in the Kingdom of Cambodia
Chasing Sunsets & Butterflies: 12 Trips in 12 Months with a Full-Time Job